The Soča-Isonzo is a 138-kilometres long river that originates in the Julian Alps in north-western Slovenia and flows into the Adriatic Sea in Italy. The river represents a shared heritage for Gorizia, Nova Gorica and Šempeter-Vrtojba, given the value of the landscape, the amount of natural resources and the biodiversity, even if it is not always fully and consciously used by the inhabitants of the area.

The goals of the project are the conservation, protection, recovery and development of the natural and cultural heritage of the cross-border area along the Isonzo-Soča river, as a homogeneous tourist-recreational destination.

What does the project provide for?

The Isonzo-Soča project aims at “giving back” the river to the cities, encouraging the citizens to take advantage of the territory crossed by the river. Ideally, this goal will be reached through a series of works that will increase the value of the area by improving its accessibility. These works will also increase the number of tourists by making the area more suitable for tourism purposes.
The Isonzo-Soča project includes the construction of a cross-border network of walking and cycling routes that will constitute a cross-border urban park; this park will improve the sustainable mobility of the inhabitants of the area. Consequently, the area will also become more attractive for citizens and tourists and this will positively affect the economy of the area. Furthermore, a communication campaign will promote and identify the territory as a new touristic destination.

Specifically, the project aims to the construction, in the territories of Gorizia, Nova Gorica and Šempeter-Vrtojba, of a cross-border network of cycle and pedestrian paths along the Isonzo river and along the State Border that connects Salcano to Šempeter-Vrtojba. By 2021 substantial infrastructure works will be carried out, which will improve the usability of the area and increase its attractiveness for citizens and tourists

The EGTC GO manages the project as the sole beneficiary. This is the first case, on an European scale, of implementation of a common strategy by a sole beneficiary. The EGTC GO deals with the design and construction of the infrastructures, in order to coordinate the financing interventions, harmonize the planning and executive phases of public procurement and adopt a common communication and promotion strategy.

Planning the cross-border territory together

For the realisation of the infrastructures envisaged by the Isonzo- Soča project, the EGTC GO will be able to decide whether to apply the Slovenian legislation or the Italian legislation with the applicable law for contracts. The municipal councils of the three municipalities of Gorizia, Nova Gorica and Šempeter-Vrtojba approved an act by which they delegate the assembly of the EGTC GO to decide from time to time which legislation to apply. This is the first resolution adopted by all three municipal councils, which lays the foundations for a unified methodology for planning the territory of the three cities.

STRATEGIC PLAN FOR THE VALORIZATION OF THE ISONZO-SOČA CROSS-BORDER PARK:

The strategic plan for the enhancement of the Isonzo-Soča Cross-Border Park starts from an integrated study of the cross-border area of ​​the EGTC GO in order to identify the tourist attractiveness. The plan aims to increase the number of visitors and to diversify the tourist offer by focusing on gastronomy and bicycle. It also aims to create a cycle Ring, which could be tourist attraction, but also an infrastructure used by citizens as a "bicycle ring road" for daily journeys.
The strategy developed takes into account economic, but also environmental, infrastructural, cultural, historical and sociological aspects and it was preceded by a comparison with numerous local stakeholders (from Universities to the hoteliers, from environmental to cultural associations and so on). 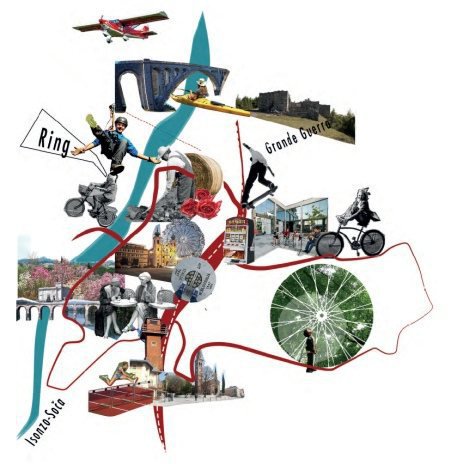 The Strategic Plan has been modified, adding a second part, deriving from the implementation of the action plan of the Cyclewalk project.

The action plan’s goal was to enable evidence-based decision-making for selecting the priority measures to promote the new Isonzo-Soča park.

It is a living document, which municipalities can modify and better at any time.

Find here the report on the implementation of the action plan, with its two annexes.

3. Lot 3 - “Realization of cycle and pedestrian paths along the state border"

Construction of cycle-pedestrian path that connects Solkan/Salcano, through via degli Scogli and Kolodvorska pot, through Piazza Europa / Transalpina, to Erjavčeva ulica and via San Gabriele. From here the existing routes allow to continue up to the Rafut border crossing point. From Rafut, the cycle path continues south towards Vrtojba and further on to Miren.

4. Lot 4- "Construction of cycle paths along the Isonzo River"

The first cycle path in question connects Solkan/Salcano, trough via degli Scogli, to the Torrione bridge and continues through via dei Cordaioli to the Straccis pedestrian walkway. It therefore constitutes the Gorizia stretch of the FVG 5 "Isonzo cycle path" as indicated in the Regional Landscape Plan which, from the Straccis bridge, continues along the Isonzo/ Soča through the other municipalities of the province of Gorizia up to Grado.

The second itinerary connects via San Gabriele to the Torrione bridge through via Generale Scodnik, via Brass and viale XX settembre. The cycle path in question creates the east-west connection as envisaged in the integrated territorial marketing plan.

The project provides for the networking of all existing cycle and pedestrian routes with a view of offering a single cycle route for the EGTC GO territory and therefore includes a path on the opposite bank to continue the Salcano-Plave route.

In 2018, a speed limited zone of 30 km / h was established in the area of ​​via degli Scogli, via Brigata Etna, via Angolo, via delle Sassaie and via Antonio Cappellaris, to encourage cycle and pedestrian mobility and a first cycle-pedestrian path along the Isonzo near the Salcano border.

Lot 4 also provides for a pedestrian path on the banks of the Isonzo/ Soča and on the agricultural area of ​​Solkan/Salcano.

Some cycle-pedestrian paths will be created in the agricultural area located along the bend of the Isonzo, between Solkan/Salcano and via degli Scogli. The routes will allow the enjoyment of a landscape area of ​​great interest, allowing tourists to get to directly know the productions of the Gorizia rose and of the vineyards suited to the production of the Isonzo doc.

Some pedestrian paths that allow to reach the banks of the Isonzo river and natural beaches of great beauty will be restored.