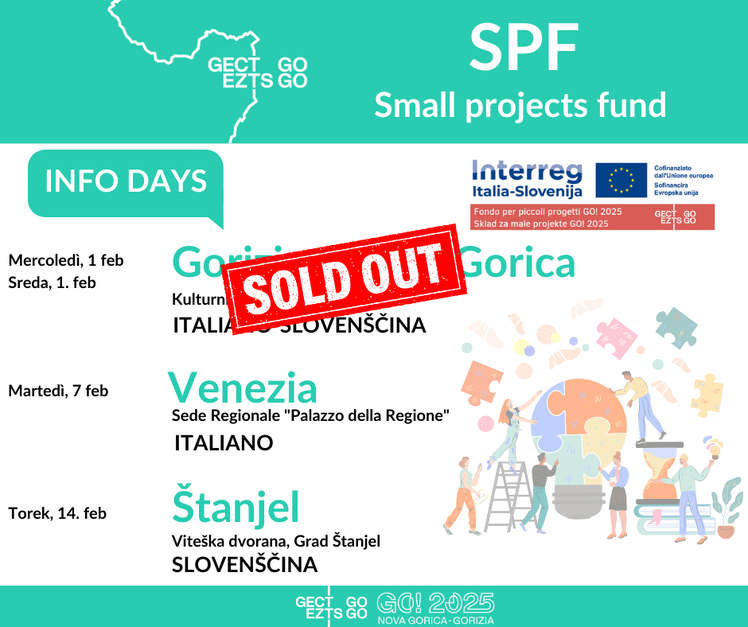 Three Info days launch the tenders for the Small projects fund within the Interreg Italy-Slovenia programmer under the direction of the EGTC GO / EZTS GO.

Starting from 1 February, the EGTC GO will present the opportunities offered by the Small Projects Fund to the entire territory included in the Italy-Slovenia Interreg Programme: an endowment of 8 million euro which will finance – from this year until 2026 – small-scale Interreg projects.

What does it mean? With a goal to support cross-border territories in the creation of new collaborations and the development of new sustainable tourist and cultural initiatives in view of the European Capital of Culture 2025, the EGTC GO has been identified by the Italy-Slovenia Interreg Program as the body implementing and managing the small projects fund in support of the European Capital of Culture Nova Gorica-Gorizia 2025. The EGTC GO will manage the contribution and will redistribute it in the entire program area as defined by the Interreg Italy - Slovenia Programme.

How? Through simplified tenders that will be published annually starting from 2023 and until 2026, in any case until funds run out. Unlike the usual Interreg tenders, the candidate projects can also be small (starting from 30.000 euros) up to a maximum of 200.000 euros.

All the details of the calls, the award criteria and the types of projects admitted will be illustrated during the three Info days that precede the publication of the actual calls. They start in Friuli-Venezia Giulia: Wednesday 1 February bilingual appointment in Gorizia (Italian/Slovene), at Kulturni Dom at 16:30. The following week will be the turn of the Veneto region, in fact we remind you that the province of Venice is one of the Italian areas involved in the Italy-Slovenia Interreg. The meeting will take place in the capital on Tuesday 7 February in the conference room of the Palazzo Regionale in Venice, at 10:30. Finally, the closing event will be in Slovenia: Tuesday 14 February at 10:00 in Viteška dvorana at the Štanjel castle: meeting addressed to the realities based in the Slovenian regions of Notranjsko-primorska, Osrednjeslovenska, Gorenjska, Obalno -kraška and Goriška.

“The fund for small projects represents a very important tool for our territory in the phase of approaching the European Capital of Culture 2025. It will allow to support directly the projects of companies, associations and entities of the cross-border territory who want to collaborate and be an active part in view of this important appointment in 2025 with initiatives that must also remain in the time to follow. – says Romina Kocina, director of the EGTC GO - The optimal use of the Small Project Fund is one of the pillars of our commitment alongside the GO!2025 to grow Gorizia/Nova Gorica and collaborations with neighbouring areas. ”