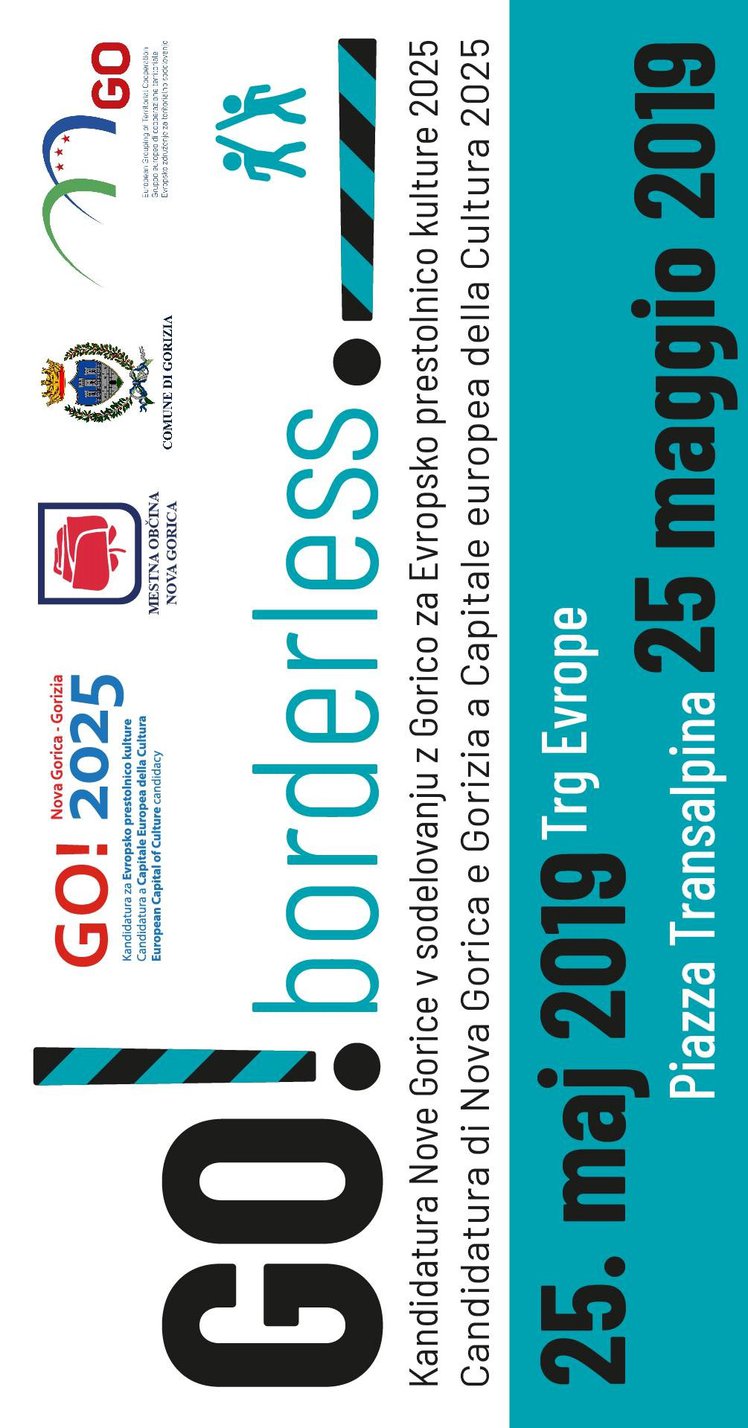 Saturday, the 25th of May, Klemen Miklavič, mayor of Nova Gorica, and Rodolfo Ziberna, mayor of Gorizia, will officially sign the agreement for the candidacy of Nova Gorica - Gorizia to European Capital of Culture 2025 (GO! 2025). The signature will be affixed at 9.15 pm in Piazza Transalpina / Trg Evrope, as part of Go! borderless event, organized by the Municipality of Gorizia, Mestna občina Nova Gorica and the European Grouping of territorial cooperation EGTC GO to officially launch the cross-border application. The title of the event well summarizes the meaning of the candidacy itself and the important common path that the two cities have undertaken. Nova Gorica and Gorizia are ready to play a very important game together. A fundamental match to improve the quality of life of its inhabitants and to strengthen their sense of community, and crucial for the tourist-economic revitalization of the entire cross-border area, so much so that both Municipalities have made available resources for this project . The Friuli Venezia Giulia Region, with a view to promoting the regional territory has also made an extraordinary contribution to support the candidacy.

Go!Borderless will also be an opportunity to inaugurate, at 6.30 pm, the office that is handling all the activities necessary for the candidacy for European Capital of Culture 2025. The office is located in Piazza Transalpina / Trg Evrope, a symbol of the collaboration between the two cities, which, as part of the GO! 2025 will also be subject to redevelopment through an international ideas competition under the auspices of the UIA, Union Internationale des Architectes - International Union of Architects and according to UNESCO standards. Two cultural meetings will follow the cutting of the office tape by Miklavič and Ziberna (Tullio Aebischer: History of a borderline between Nova Gorica and Gorizia, Dialogue with the author of the book and Jean-Paul Bled and Luigi Mascilli Migliorini: Families of history- The Bourbons) and, at 9.30 pm, the concert without borders of the assembled orchestras Goriški pihalni orkester,, Orchestra Civica di Fiati “Città di Gorizia” and Banda Città di Cormons with the soloists Eroika Aromatika and Diana Mian. The event is organized in collaboration with èStoria, Goriški Muzej, Kit- Cultural information touchpoint Nova Gorica and Mesto Knjige. Admission to all events is free. In case of bad weather the events until 21.30 will be held at Kromberk Castle, while the cross-border concert will be canceled.

Go!Borderless is only the first launch event of the candiday of Nova Gorica - Gorizia as European Capital of Culture 2025. On Tuesday 21 May Miklavič and Ziberna will participate, in Milan, together with the members of the cross-border team GO! 2025, at the press conference for the presentation of the Milanesiana Letteratura Musica Cinema Scienza. Within the prestigious festival directed and designed by Elisabetta Sgarbi and characterized by the dialogue between different arts, with authoritative international exponents, a special space will be dedicated to GO! 2025, with several scheduled appointments gathered under the title of “La Milanesiana cross-border. For Nova Gorica-Gorizia candidate for Capital of European Culture 2025 ".