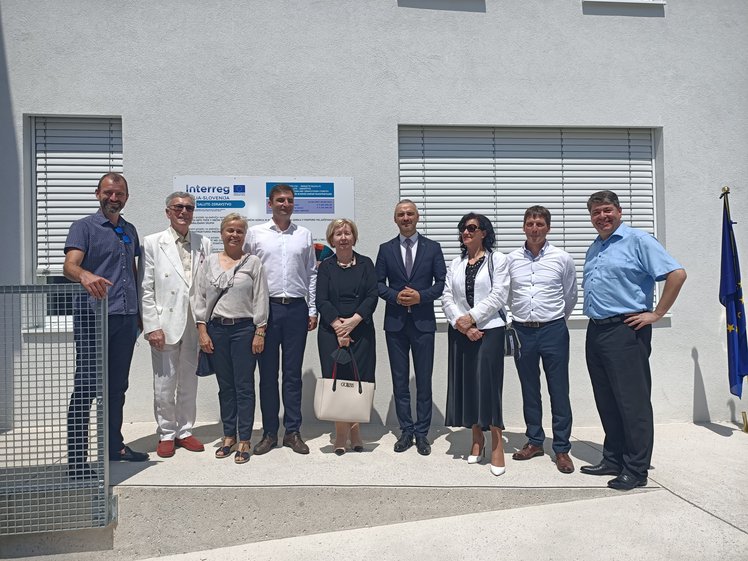 The visit of the Slovenian Minister of Labor, Family, Social Affairs and Equal Opportunities Janez Cigler Kralj in the Goriška region was marked by talks on the social situation in the Municipality of Nova Gorica. As part of the visit, the Minister, the Mayor of the Municipality of Nova Gorica, dr. Klemen Miklavič and the President of the EGTC GO Paolo Petiziol inaugurated the renovated Community Centre in Nova Gorica. It includes the Info Point and the Centre for Mental Health realized within the cross-border project Salute-Zdravstvo, led by EGTC GO. In addition, the community center will also have a Day Care Centre for people with mental health problems, which will coexist with the Info Point, the Shelter for the Homeless and the Housing Group for People with Long-Term Mental Health Problems.

The total value of the project is 1.3 million euros, and it is financed from several sources, the Municipality of Nova Gorica, the Slovenian Ministry of Labor, Family, Social Affairs and Equal Opportunities and EGTC GO within the Salute-Zdravstvo project. The Community Center will aim to reduce the risk of poverty and increase the social inclusion of socially vulnerable groups, as well as a form of intergenerational and cross-sectoral cooperation and an example of good practice of coexistence in social and health care programs and children's and youth programs. The Community Centre will be managed by the Nova Goricas’ Youth Centre (Mladinski center).

At the opening of the Community Centre, Minister Cigler Kralj said: “The symbolism is exceptional. The former single labor home has become a Community Centre, and I can say for sure that this is another proof of the excellent cooperation of the local community and cross-border cooperation, as all those in charge have contributed their stone to the mosaic. With the participation of the local community and NGOs, I can also say local politicians, it will provide a home, a refuge for the most vulnerable groups. This is our common responsibility because society is strong as much as it knows how to take care of its weakest and involve them as best as possible, to support them so that they know how to use their potentials."

Mayor of Nova Gorica dr. Klemen Miklavič highlighted the contribution of the EGTC GO: “We are integrating social services, connecting the community in the unified area of ​​both Gorizia. The care for marginal groups is a common concern of a single conurbation, which indicates this strong connection between the two Gorizia. The Community Centre is an important step in this direction. Every European city that gives something of itself is socially connected, cares for marginalized groups. Nova Gorica and Gorizia, as the European Capital of Culture, are certainly cities that form a single urban area that also integrates social services."

Tomaž Konrad, Assistant Director of EGTC GO: “Part of the EGTC GO is the Slovenian Center for Mental Health and Info Point, which is one of the three info points in the network. A good year ago we opened the point in Gorizia, and a few months ago a smaller one in Šempeter pri Gorici. The aim is to establish a network where users, citizens of our three municipalities, will be able to get information about social and health services. We are happy to hand over the premises to the function. We believe it will come to life. It is aimed at a wide range of social groups. We invite people to come and see all the information as soon as possible."

The Salute-Zdravstvo project is financed by the Interreg Italia-Slovenija Program 2014-2020.