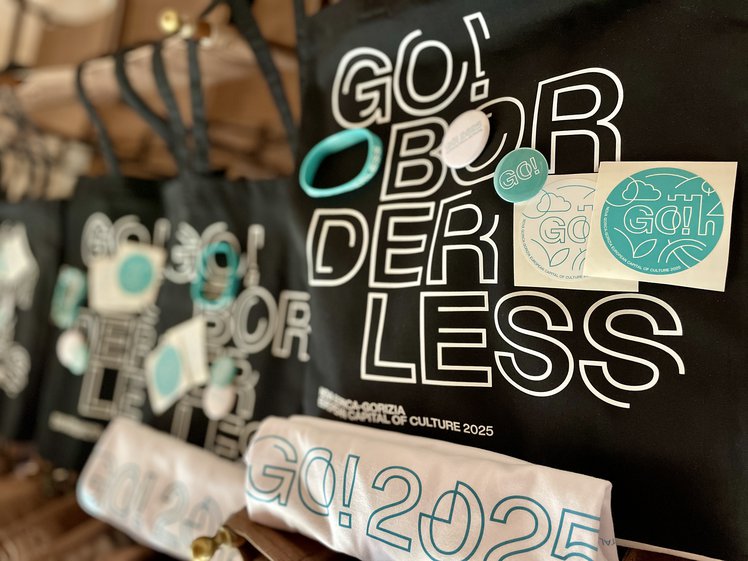 The winner of the contest for the new logotype GO! 2025 was presented in front of the two cities’ mayors and the main institutions involved in European Capital of Culture 2025.

GECT GO and JAVNI ZAVOD GO! 2025 presented the winners for the new logotype and coordinated graphic image contest for the European Capital of Culture Nova Gorica – Gorizia 2025 during the press conference in Casa Morassi – Casa Panizzolo in Borgo Castello.

The director of the EGTC GO Romina Kocina illustrated the different phases of the “contest of ideas” that started in the summer of 2021 and ended in February 2022. The contest aimed at identifying a distinctive and unique symbol for GO! 2025. The choice was particularly articulated, as it was not only about the creation of a single logo but the entire coordinated graphic image that also considered the sub-themes of the Bid Book, which included the turquoise color as a natural feature of the Soča River, as well as being original, innovative, inclusive, and “borderless”, as it aims to be the new European Capital of Culture.

The identification of the logo has aroused a lot of interest from the operators. This means we had over 3,500 unique visitors to the site from all over the world, about 90 registrations and 67 graphic proposals presented.

“The commission confirms that the submission of the winning team is characterized by a high aesthetic standard. The international comparison shows that this submission is quite respectable: it fits perfectly with the idea of a European Cultural Capital. The logo is also very flexible for different purposes and the recognizability of the brand is comprehensible.
In modern European graphics, the use of typography is increasingly valued, such as international agencies such as: Experimental Jetset, Neubauberlin or Spin Studio. In our case, the chosen project sees the use of the font as a means of communication, not marking an event, but giving a European reading to the event itself. The malleability of the "typography" allows to adapt the same letters transforming them into graphic "signs" useful for communication or ideograms to be used in any brand identity. Specifically, the choice of an easy-to-read font such as a "Grotesk" and the monochromatic use of representation, facilitate both the understanding and the repetitiveness of the sign."

The winners are the three freelancers Michele Pastore, Giulia Bardelli and Andrea Guccini of Studio But Maybe in Bologna. The studio deals with branding, web design, programming, publishing, and content creation for clients from the world of culture, commerce, institutional and non-profit. During the conference they illustrated the concept of "A writing system for Nova Gorica – Gorizia European Capital of Culture 2025":

“Starting from the will to enhance the peculiarities of the territory of Nova Gorica and Gorizia, Studio But Maybe has chosen to develop an identity proposal that overcomes the traditional concept of the logo. A flexible and constantly changing system rather than a single and static representation. A visual approach telling about these two cities that strive and dwell together for a borderless, multicultural, multi-linguistic, innovative, and green-shared reality.“

The Marketing manager of ZAVOD GO! 2025 Andreja Agrez, illustrated some of the main conditions and methods of use of the graphics and content elements derived from GO! 2025. The regulation for the use of the logo is in fact still in the process of being prepared and provides for various cases of use, both for public institutions and for non-governmental organizations and municipalities on the Slovenian and Italian side, included in the project area GO! Borderless. There are three types of logos:

- The "Area EPK" logo (ECoC area) is a logo used to highlight that the activity or operation is included in the area in the GO! Project. Borderless. The logo is used based on the written consent of GO! 2025 in collaboration with GECT GO,

- Exclusive program logo assigned to events and projects included in the final Bid-book and to those still to be part of the official GO! 2025 (official program). The approval of the use and of those entitled to use the program logo will be the sole responsibility of the program manager of the GO! 2025.

The main keywords that have already caught on in the public are # go2025 and #GoBorderless.