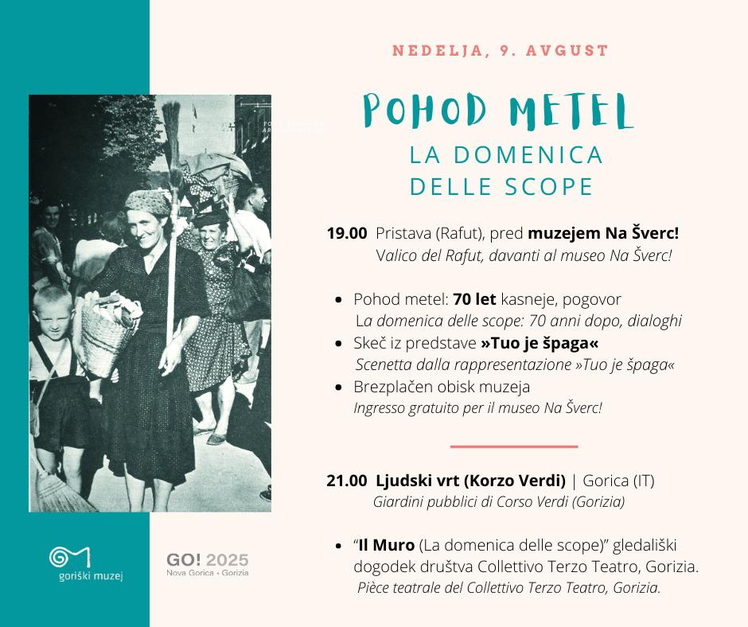 On a Sunday, 13. 8. 1950, in the time when border between Yugoslavia and Italy was quite tightly closed, a unique event took place at the border-crossing in Rožna dolina and in Gorizia.

For a day, Yugoslav citizens could freely cross the border and walk the streets of Gorizia again, after a month short of three years. Crowds of people gathered at the Rožna dolina border-crossing. It was a day of reunions, as friends could meet again and families reunite after long years of not being able to see each other.

Seventy years later, we were once again separated by the border. No one thought we would live to see the border cutting between families,friends and co-workers again. Today, the anniversary of this event has an even deeper meaning than it had in the last decades.

To celebrate this historic moment, which came to be called “March of the Brooms”, we are, in accordance with the current epidemiological guidelines, organising an event “Pohod metel · La domenica delle scope: 1950 – 2020”. It will take place on Sunday, 9. August 2020 at the Pristava border-crossing (Slovenia) and in Giardini publici in Gorizia (Italy). Both events have limited seats and will be held in language spoken in the country of the event. For more information please see the Invitation. We will be happy to meet you.

But how did this historic event got to be called “The March of the Brooms” (Slo. pohod metel, It. la domenica delle scope)? Gorizian merchants, seeing vast number of people coming to Gorizia, hurried to open their shops even if it was Sunday. Yugoslav citizens bought items that were scarce in their country at the time. Out of these items sorghum brooms were the most visible. And at the end of that Sunday, when Yugoslav citizens were returning back home, some elderly still recall witnessing a crowd marching through the streets with a broom on their shoulder.