Inauguration of the foot bridge over Soča/Isonzo in Solkan 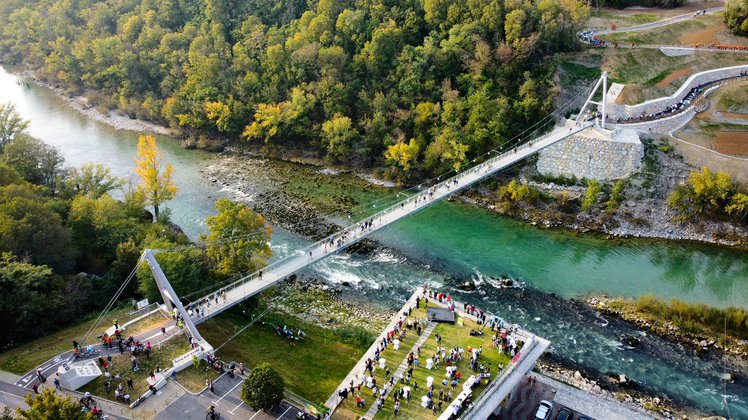 The common cross-border space of the Municipality of Nova Gorica, the Municipality of Gorica and Šempeter-Vrtojba received an important acquisition today, which will further connect both banks of the Soča/Isonzo River and the two countries. A new footbridge over the river Soča/Isonzo for cyclists and pedestrians was dedicated to its purpose at the Kayak Center in Solkan.

By investing in a new connecting cycle path on the right bank of the Soča/Isonzo river, which we also opened together with the footbridge today, the municipality of Nova Goricapa made it possible to establish a connection between the footbridge and the existing cycle path in the direction of Plava and the future cycle path to Štmavr in Italy .

The footbridge enables a safe and attractive bridging of regional cycling routes, and at the same time includes new intercity cross-border connections between Nova Gorica, Gorica and Šempeter-Vrtojba. As part of the Isonzo-Soča project, financed by the Interreg Italia-Slovenia 2014-2020 Program, Nova Gorica, Gorica and Šempeter-Vrtojba will gain new recreational opportunities for residents and visitors by building missing bicycle connections or sections on the Slovenian and Italian side. At the end of the month of October, the European Grouping of Territorial Cooperation will complete the work on bicycle and pedestrian paths with a total length of 14 km and put the entire network of these paths into use.

EGTC GO built the footbridge as part of the Isonzo-Soča project financed by the Interreg Italia-Slovenia 2014-2020 program. With this project, EGTC GO establishes a common cross-border network of bicycle and pedestrian paths, which creates an urban cross-border park between Nova Gorica, Gorica and Šempeter-Vrtojba.

"On the one hand, this is aimed at raising the quality of living in our area by improving the conditions for sustainable and active mobility of residents, and on the other hand, we want to strengthen the attractiveness of our cross-border area for visitors and tourists with these investments. It is a starting point, basic infrastructure, which we want to expand and upgrade in the coming years, also by connecting integrated tourist products/services, which will undoubtedly contribute to the recognition of the area as a new tourist and recreation destination," emphasizes the European Grouping of Territorial Cooperation EZTS GO .

The footbridge is only the most visible, representative object in this whole, as part of the Isonzo-Soča project, for which EGTC GO allocated 5 million euros. The construction of the footbridge over the Soča/Isonzo river in the recreation park in Solkan was an exceptional project from several aspects. It is one of the larger and more demanding infrastructure investments, which was financed from the EU cross-border cooperation program (Interreg). Suspension bridge or the footbridge has a span of 120 m, a width of 3 m, and the height of the two supporting pylons is 14.5 m. It is important for our area because it enables bridging the bottleneck of bicycle connections and footpaths on the axis north - south, or Posočje - Karst, west - east, Friuli (Italy) - Vipava valley. In this way, we not only strengthen the connection of this most beautiful European river with our neighborhood, but we also open it up and integrate it into the wider cross-border area, thus enriching its touristic/economic potential. The Soča/Isonzo River represents for the neighborhoods of Gorica, Nova Gorica and Šempeter-Vrtojba, from the point of view of the landscape, natural resources and biodiversity, the heritage of a common identity, which we want to further evaluate. As Tomaž Konrad, deputy director of EGTC GO points out, "the footbridge, the recreation park in Vrtojba and all connecting routes in between, connect and offer a new view of the river, the sports park in Solkan with a kayaking track, the Solkan field, Trg Evrope/Piazza Transalpina, and the nearby hills of Brda in the west and on the Vrtojbensko-Biljen hills in the south or to the rich natural scenery of the hinterland of our three towns, Nova Gorica, Gorica and Šempeter-Vrtojba. »

The director of the European Grouping of Territorial Cooperation, Romina Kocina, said: "The foot bridge over the Soča/Isonzo river is an important professional achievement of EGTC GO, which confirms the competence and perseverance of this team in managing complex projects. This was definitely an important, long-term and sometimes very demanding project, which proves that strategically important projects can be realized if there is only the will and support of the common area and institutions."

The head of the management body of the Interreg Italy - Slovenia program, Laura Comelli, emphasizes the importance of cross-border cooperation: "With the projects financed by the Interreg Italy Slovenia Program 2014-2020, cross-border cooperation in our area always surprises us by creating concrete, lasting and useful results not only for inhabitants, but also for Europe itself. It gives us tangible proof of the quality of the results and the efficiency of the use of public funds. The Isonzo-Soča project fits well into this context, which is part of an integrated territorial investment financed from a program with a total budget of 10 million euros. We are proud of the results achieved, which add a very important element to cross-border mobility from the source to the mouth of the Soča/Isonzo river, which can be shown as the best practice of cooperation in Europe."

The ribbon was ceremonially cut by the President of the European Association for Territorial Cooperation EZTS GOPaolo Petiziol, Mayor of the Municipality of Nova